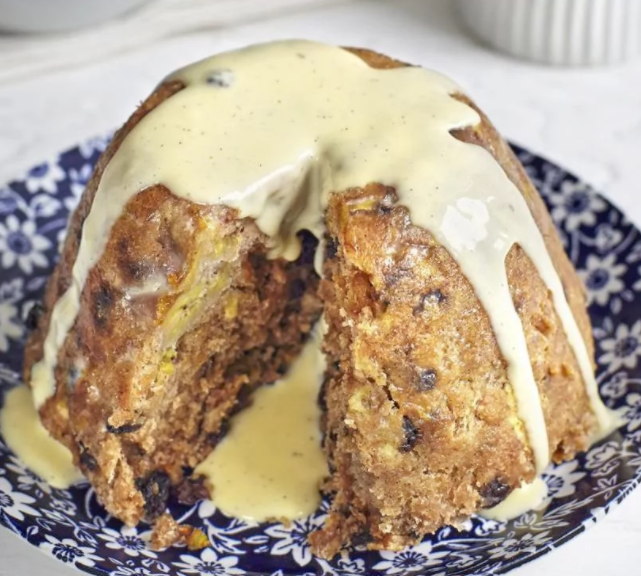 Welcome to another recipe from Afternoon Baking With Grandma, and today I’m going to show you a classic and pretty darned good dessert, spotted dick with custard,  this is actually a suet pudding and it’s an absolute classic, right up there with jam roly-poly in the great British pubs with silly names, or indeed British dishes in general with silly names.

But putting all that aside it’s lovely, it’s not actually stodgy, it’s quite light and the custard I’m going to show you is quite easy, quite delicious.

So then, the ingredients for the spotted dick are:

100 grams of the sultanas or currents

and also the zest of a lemon

Now you want to mix all your dry ingredients together, so the flour, the sugar, the currants/sultanas and the suet,stir well.

If you don’t know what suet is, it’s just a type of fat and yeah can be a bit tricky to get sometimes but most large stores stock it. Then just grate some zest in there.

I’ll just stir in the water now we’re ready to cook the pudding, traditionally you would do it in a big pudding basin but I don’t want to do it that way, I’m going to do individual ones.

I’ve got the smaller sort of pudding basins,one person sized, and I’ll pop some of the pudding mix into each one.I would leave a good space at the top because it will expand during steaming,

You then want to wrap each pot in foil quite tightly, that basically is to keep the steam in and the water out.

I’ve seen lots of recipes where they first of all cover their pot with grease proof paper with a pleat folded in it and then cover it with foil with another pleat and tie it with string and all kinds of messing about, but you only need to do that if you’ve got pudding basin that’s full to the top, because that pleats is needed for expansion.This recipe won’t rise as much as that so we won’t need that expansion gap.

We’re ready to cook the spotted dick now, so put them in a pan and just boil some water hot water, then you fill it up to a level about two centimetres, about an inch below the top of the pots, and when that’s boiling put the lid on and keep it bubbling away for about an hour.

If you’re doing a bigger one it might take as long as two hours to cook properly. okay bonus recipe,custard English style or creme Anglaise which is French for English cream, it is a mix of sugar, egg yolks and hot milk, often flavoured with vanilla. the ingredients list can be found further down the page here.

The cream is made by whipping egg yolks and sugar together until the mixture is light in colour, to do this we whisk the eggs and sugar together to incorporate air into the mixture, then we simmer the milk until it starts to wisp on top, wisping is a culinary term for a buildup of light steam.  Once the milk starts to wisp, we slowly pour it over the eggs and sugar mixture, this process is called tempering, tempering is to gently heat egg yolks before adding to a hot sauce by adding about a spoonful of the hot sauce and beating well with a wire whisk.

Another way to test for doneness is through a technique called napee, take the wooden spoon and immerse it into the sauce with the back of the spoon facing you, run your index finger across the spoon, if you end up with a clean line across, your sauce is ready. once the mixture has fully cooked, quickly submerge it into a bowl of cold water to stop the cooking process.

When the mixture has cooled add the vanilla strain the sauce through a sieve and transfer to another bowl and there you have it.Sauce Anglaise to go with your spotted dick pudding.