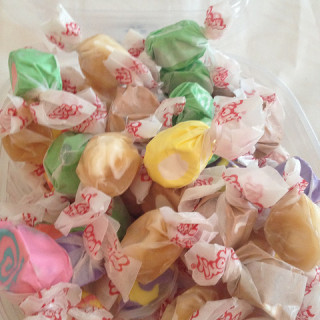 Coming from Britain I am not quite sure what salt water taffy is as we don’t make it over here but it seems very popular else where ,so I thought I would but up a recipe for you guys and find out a little bit more about salt water taffy in the process

This recipe shows you how to make the basic recipe  which is brought to you courtesy of Sia Blu on YouTube where she makes watermelon flavour .. Thanks for sharing this recipe with us

Here below is a excerpt about salt water taffy from wikipedia.org which I found useful to find out what taffy is and where it originated from

Taffy, or chews, are a type of candy similar to toffee. Taffy is often sold alongside bubblegum and hard candy. Taffy is made by stretching or pulling a sticky mass of boiled sugar, butter or vegetable oil, flavorings, and coloring until it becomes aerated (meaning that tiny air bubbles are produced, resulting in a light, fluffy and chewy candy[1]). When this process is complete, the taffy is rolled, cut into small pastel-coloured pieces and wrapped in wax paperto keep it soft. It usually has a fruityflavor, but other flavors are common as well, including molasses and the classic unflavored taffy.

Salt water taffy was a noted invention of Atlantic City, New Jersey, and became a common souvenir of many coastal resort towns. Modern commercial taffy is made primarily from corn syrup, glycerin and butter. The pulling process, which makes the candy lighter and chewier, consists of stretching out the mixture, folding it over and stretching it out again. Although it is called “salt water” taffy, it does not include any salt water in its manufacture at all. In the nearby Philadelphia regional dialect, the term “taffy”, without “salt water” before it, used to refer to a lollipop or sucker.