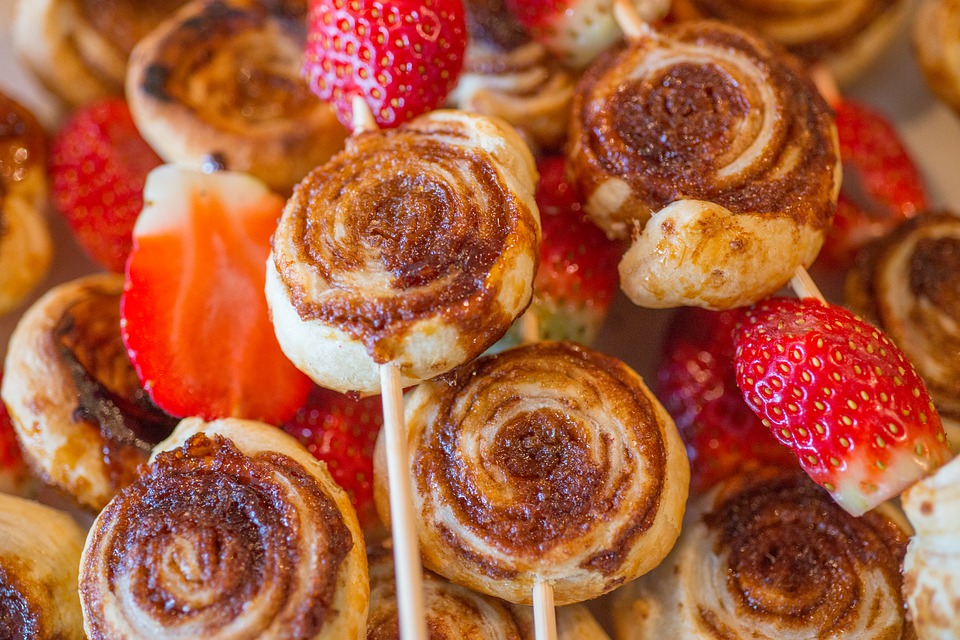 These cinnamon roll pops or cinnamon rolls on a stick is another sweet treat you can make for your kids’ birthday, Halloween party, or just an ordinary day snack.

If I don’t have cream cheese, I usually add strawberries or any fruits available together with the mini cinnamon rolls on the stick.

How to Make Cinnamon Roll Pops

Preheat the oven to 350°F. Grease a 16-mini cup muffin pan with baking spray. Mix brown sugar and pumpkin pie spice in a small bowl and set aside.

On a lightly floured surface, unroll the dough sheet. If you are using a crescent roll, you need to pinch the perforated seams to create a smooth and whole rectangle dough, but if you are using a seamless one, then there is no need for this process.

Spread the ¼ cup butter on the dough and then sprinkle the cinnamon-sugar mixture. Gently press the mixture and roll the dough up tightly, starting from the longest side. Slice the dough into 16 pieces about ¾ inch and put them, cut side down, into the prepared muffin pan.

Bake for 13 to 15 minutes or until golden brown. Remove from the oven and pan; insert lollipop sticks into the side of each roll. Cool completely on a wire rack.

While cooling, prepare the glaze. Beat cream cheese and butter until smooth. Slowly add powdered sugar, vanilla, and then one teaspoon at a time for the milk. You can add more powdered sugar if you want a thicker glaze.

Using a spoon, drizzle the glaze on top of the cinnamon rolls or create a small piping bag by transferring glaze in a small food plastic and cut a tiny hole on the corner. Squeeze the bag and pipe the glaze over the mini rolls.

To see other recipes for Cinnamon Roll Pops, check out: